Mabo and the Native Title Act

This month (May 2018) marks ten years since James Cook University officially named its Townsville campus library the Eddie Koiki Mabo Library, to honour the connection between the university and the man whose determination ultimately altered the foundation of land law in Australia. So I thought I'd post an article I wrote a couple of years ago about Mabo and the Native Title Act, which explains what the now infamous legal battle was all about, and also why the Mabo name will forever be linked with James Cook University.


In 1898 a team of scientists sponsored by the University of Cambridge arrived in the Torres Strait with the aim of conducting an extensive anthropological study of its peoples. Almost one hundred years later, this study of native peoples would become an important source of information in a legal case seeking to prove continuity of traditional land ownership that led to the landmark Native Title Act.

The seven-month expedition, which was led by Alfred Cort Haddon, a distinguished natural scientist, focused on the islands of Mer and Mabuiag, and included scholars from the fields of linguistics, medicine and psychology. Data collected included physical descriptions of Islanders and local genealogies, along with information on local customs, languages, art, music, medicine, house construction and land tenure. 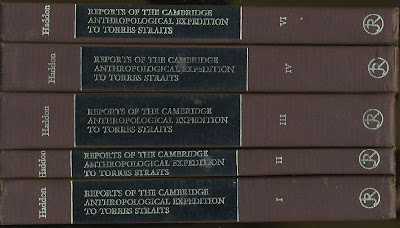 The expedition resulted in the publication, between 1901 and 1935, of the Reports of the Cambridge Anthropological Expedition to Torres Straits. As a complete body of work, the Reports documented in minute detail the life of the Torres Strait Islander people from around the time of the legal annexation of the Torres Strait Islands to Australia in 1879. Importantly, the genealogies recorded by W.H.R. Rivers that were published in Volume Six of the Reports, were used as evidence in the now infamous Mabo land rights case.

The man whose name would become synonymous with Native Title - Eddie Koiki Mabo - was born on Mer (Murray) Island, in the Torres Strait, in 1936. He came to the mainland in 1957 and worked in various industries but it was during the years 1967 to 1975, when he worked as a groundsman and gardener at James Cook University, that he began studying Haddon’s six-volume report on the Torres Strait, in the university library during his lunch breaks.

At James Cook University Eddie Mabo met and formed friendships with academic staff including Henry Reynolds and Noel Loos, who explained to him that he did not own the land on Murray Island where he had grown up; the Queensland government did.  Mabo was reportedly shocked to discover this, and the revelation set off a chain of events that ultimately altered the foundation of land law in Australia.

After delivering a speech at a land rights conference at James Cook University in 1981, where he spoke about land ownership and land inheritance on Murray Island, Mabo was encouraged to mount a legal challenge over land rights.

In 1982, Eddie Mabo and four other Torres Strait Islanders - Sam Passi, David Passi, Celuia Mapo Salee and James Rice – began their fight for ownership of lands on several islands in the Torres Strait, including Murray Island. The case that became known as “Mabo No. 1” was heard by Justice Martin Moynihan in the Queensland Supreme Court.

Things did not go altogether smoothly for Eddie Mabo in “Mabo No. 1”, with Justice Moynihan criticising Mabo’s testimony and questioning his credibility. In particular, Justice Moynihan found it difficult to believe that Eddie Mabo could remember in such detail, conversations with his grandfather from boyhood, and wondered how much of Mabo’s knowledge of Murray Island traditions had come from the Cambridge Reports, or indeed from other material that had been published about the Torres Strait, such as Ion Idriess’s novel, Drums of Mer, published in 1933.

In a paper written for the Australian National University in 1993, Jeremy Beckett, an anthropologist who was called as an expert witness in the Mabo case, and who had conducted field work in the Torres Strait Islands between 1958 and 1961, wrote that he visited Murray Island with Eddie Mabo in 1977 and was surprised by his knowledge of the island.

“I was surprised that someone who had left Mer around the age of fifteen and had scarcely been back until his forties knew as much as he did.”

“Some of it may indeed have come from the Cambridge Reports or from Idriess's novel. But much of it did not. He had, for example, an extensive knowledge of plants, including those used for various dance ornaments and implements, which was not to be found in print. Nor could he have got from books, the vivid, detailed mind picture of the land which he presented to the court.”

Beckett also believed that the genealogy Mabo recounted went back further than could be found in the Cambridge Reports.

By the time the case reached the High Court of Australia, at its core was the question of whether the Murray Islanders (Meriam people) had a system of land ownership that predated the arrival of Europeans, and if they did, whether that system still existed. It was not enough to prove that the plaintiffs and their descendants had been in continuous occupation of the islands, but that a system of governance of ownership had existed “from time immemorial” and had been maintained into the present day.

Although three of the plaintiffs (including Eddie Mabo) did notlive to see the outcome of their ten year battle, in June 1992, the High Court of Australia ruled in favour of Mabo in Mabo and Others v. State of Queensland (No. 2) (1992), resulting in the Native Title Act 1993.

In recognising the traditional rights of the Meriam people to their islands in the eastern Torres Strait, the High Court also held that native title existed for all indigenous people in Australia prior to James Cook’s expedition in 1770, and prior to the establishment of the British Colony of New South Wales in 1788.

The Native Title Act destroyed the 200 year-old doctrine of terra nullius (meaning land belonging to no-one) by which Australia had been colonised.

This article is copyright Trisha Fielding, 2016.


Posted by Trisha Fielding at 13:09 No comments: