A University for the North 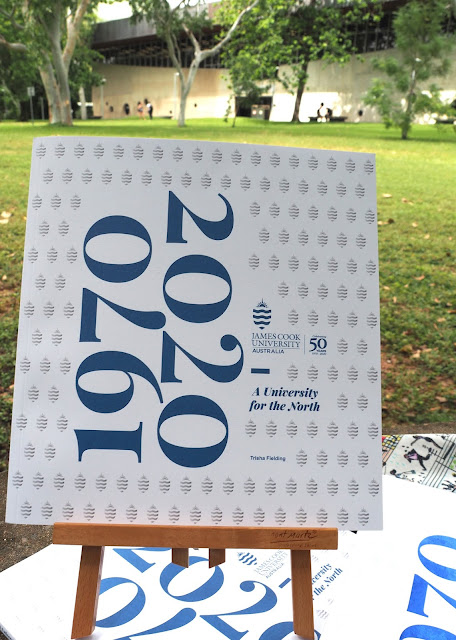 So what's in it? There are biographical-style articles on some extraordinary people, as well as stories on the development and growth of the university; its remarkable legacy of research and knowledge; and its contribution to the cultural life of North Queensland and the Tropics. 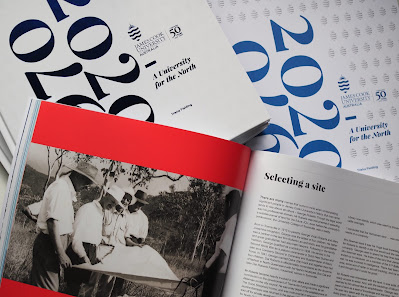 Publication details:
Title: A University for the North: James Cook University 1970-2020
Author: Trisha Fielding
Published by Bounce Books, an imprint of Hyphen, 2021
ISBN: 978-0-6450545-0-7
Other: 123 pages, 280mm x 260mm (portrait)
Where you can get a copy:
Contact the Office of Vice Chancellor and President, James Cook University, Townsville

Posted by Trisha Fielding at 12:36 No comments:

I recently took a few snaps of some lovely examples of Art Deco styling in Ingham. I've yet to do any research on these buildings, but thought I'd share the photos now anyway. It's a bit of a shame about the modern signage, and the weather was not on my side either, but if you've got any historical information on the original use of these places that you'd like to share, please leave a comment!

On the 10th of May 1867, the S.S. Boomerang sailed from Bowen, bound for Sydney. It was loaded up with gold, wool, sheepskins, animal hides, tallow and other goods, and 28 passengers. One of those passengers was John Melton Black, the man who had founded the settlement of Townsville just a few years earlier. Black would never return to the town he built, but it would be almost six months before the people of Townsville had any idea that he wasn’t coming back. So what happened?

Why did Black abandon the town he had built from the ground up? Over the years, a number of possible answers to this question have been put forward (by both historians and journalists alike) but after critically evaluating primary source documents about Black and his family, I think I have found the real reason. And it’s a very simple reason that no one seems to have considered before now.

But who was John Melton Black?

In 1858 he was managing the Princess Theatre in Spring Street, Melbourne[6] but by early 1861 Black was in Port Denison (now Bowen), scrambling to secure as many pastoral leases in North Queensland as he could get his hands on. He then set out to find a site for a port along the northern coast that would provide him with more convenient access than the port at Bowen. It’s not known why Black decided to come north, but the death of his brother, James Black, in Melbourne in 1859[7] may have prompted him to leave Victoria.

Black’s involvement in establishing a new port in North Queensland

The story of white settlement in Townsville has been well documented, so it’s sufficient to note here that John Melton Black was instrumental in establishing the town. From the very beginning Black had ‘boots on the ground’, and worked hard physically to build the new port town. He was an industrious, ambitious man whose primary motive was undoubtedly to make money — so he threw himself into the venture unreservedly.

Black was highly regarded in the town and was to become its first mayor, holding that office 1866-1867. In the book Frontier Town: a History of Early Townsville and Hinterland 1864-1884, Helga Griffin gives a useful summary of Black’s contributions to Townsville:

‘He had virtually carved the original foundations out of mangroves beside a swampy creek, had personally supervised the construction and improvement of harbour facilities, and had initiated the first trading links with merchants from Bowen and pastoralists in the hinterland for whom his harbour stores and boiling-down facilities became a focus for industrial activity. He had been more responsible than any other community leader for giving the settlement an urban character, facilitating the first sales of land and negotiating the introduction of local government. His efforts attracted government personnel and funds to the town.’[8]

In early May 1867, Black left Townsville for Sydney.[9]  The trip was probably to personally oversee the winding-up of his partnership with his financial backer — Robert Towns — which had expired on the 1st May that year.[10]  Towns was a notorious penny-pincher and Black may have felt the need to deal with Towns in person, in order to finalise the dissolution of the partnership.

It seems doubtful that when Black left Townsville he intended never to return. Among his many business ventures, he had just overseen the resurrection of the newspaper Cleveland Bay Express into a limited liability company. At a meeting held on 30 April 1867, Black reportedly gave an ‘elegant speech’ that detailed the advantages for Townsville in maintaining a local newspaper. As well as being an instrument of influence on the general public, he also thought it would attract southern merchants by informing them of ‘the trade and general prosperity of our Northern Ports’.[11]  Black was also to be appointed as a trustee of the Townsville Hospital[12] although that didn’t officially happen until some months after he had left Townsville (and Australia).

Why did Black abandon Townsville?

Some sources have suggested Black was suffering from ill-health, or was disheartened after a cyclone ripped through the town, destroying much of his hard work, or had simply tired of the partnership with Robert Towns; and even a combination of all three.[13]. One story that has proved enduring, which was circulating from as long ago as the same year that Black left Townsville (1867), was that he became the beneficiary of an inheritance.[14]

This last theory may hold a grain of truth, but I think the real reason Black left Australia, never to return, was because his father had just died. Dr James Black, who had been a surgeon in the Royal Navy, died on 30th April 1867 in Edinburgh, Scotland, aged 78 years.[15]

Black may have already been on his way to Sydney when he received this news. Then as soon as he had wrapped up his financial affairs, John Melton Black went straight home to his family. He departed Sydney on the 31st August 1867, aboard the R.M.S. Mataura (a mail ship).[16] Black did not, as one historian has suggested, embark on an extensive tour of Europe before returning home.[17]

It’s hard to say whether Black went home just because he thought he stood to inherit money, or whether he wanted to support his mother after the death of his father. For the reasons I outline below, I am inclined to think it was the latter.

Black’s father, Dr James Black, left all his money and possessions to his ‘beloved and dearly affectionate wife Jane Black her heirs executors administrators and assignees’.[18]  But it’s not actually clear whether John or his brother William Thomas Black — the only two surviving issue from the marriage — received anything at all upon the death of their father. In fact when Jane Black died in 1879, her estate was worth £8,954.[19]. This was a lot of money. Her executors were her sons William Thomas Black and John Black.[20]  It is possible that Black only inherited money after the passing of his mother Jane, 12 years after he had left Australia.

In the 1881 England Census, John Melton Black’s ‘rank, profession or occupation’ is listed as ‘annuitant’.[21]  The term annuitant is not strictly an occupation or a profession, but rather a term indicating financial status. It indicates that the person supported themselves financially through their own savings or investments. In Black’s case, this may well have been from his shares in the Bell Punch and Printing Company. But by that time his mother had also died and he would have inherited a share in her estate. In any case, when Black died in 1919, his estate was valued at £25,415.[22]  (According to one calculator online, £1 in 1919 would be worth £52 in 2020, so that would make Black’s fortune around £1.3million in today’s money!).

A question that remains unanswered, is why it took so long for people in Townsville to know that Black wasn’t coming back? According to a newspaper report, news of Black’s departure was only received in late October 1867 — months after Black left Townsville for Sydney.[23]

Black remained popular in the eyes of the citizens of Townsville though, and the following year they commissioned a gold cup as a farewell gift to him. The cup, made by Messrs Cooke and Robin, of Pitt Street, Sydney, weighed close to 780grams, and was apparently sent to Black in England, via steamship.[24]

Perhaps that’s the reason Black was so tardy about telling the people of Townsville that he was going home — maybe he expected one day to return to the town he’d built?

[1]At some time while he was in Victoria, Black added the ‘Melton’ to his name.

[2]Baptism register for 1831 for the parish of Bolton le Moors, in the county of Lancaster, records the baptism of John Black, son of James and Jane Black (born 30thJune 1831), Great Bolton.

[17]Undoubtedly this statement about Black originally came from an unreliable source – W.J. Doherty (also known as Viator) who wrote of Black, that: “From Sydney he proceeded to Europe, where he made an extensive tour before settling down in London.” This was published in the Townsville Daily Bulletin in 1934

[21]1881 England Census, Black is listed as living with his family at 30 Tavistock Square, London

Posted by Trisha Fielding at 18:09 No comments: