A grazier and novelist living in the Burdekin in the 1890s, wrote the first crime novel set in Queensland.

Alfred Henry Lambton was born in Parramatta,  New South Wales in 1844. He is reputed to have brought cattle from the south to North Queensland in 1860, “and was some time in the employ of R. Towns and Co.” After his marriage to Eleanor Mary Sykes in 1875, Alfred and Eleanor settled on farming land in the Lower Burdekin and began raising a large family. Alfred was apparently a “very noted rider, and a fine man amongst stock”. But somewhat unusually for a grazier living in the Burdekin in that era, Alfred was also a novelist. Published in London in 1893 (only a year before his death in Ayr at the age of 50), From Prison to Power: a Tale of Queensland (in two volumes), is said to be the first crime novel set in Queensland. The novel centres on the fictitious cattle property "Banalba", located 200 miles inland from "Rockington" (modelled on Rockhampton).

I came across Alfred while researching one of his daughters, Edith Mary Lambton, a nurse and private midwife who ran St. Monica's Private Hospital in Townsville in the 1910s. Edith was the second eldest of ten children born to Alfred and Eleanor. (I'm writing about Edith in my latest book, so stay tuned for more down the track!) While researching Edith I discovered that she was from a very interesting family. As well as her father, the grazier novelist, a number of her siblings had interesting lives/careers as well.

Edith's youngest sister, Elsie Idrea Lambton, was a professional photographer. Trained by the photographer Ada Driver at the Ada Driver Studios in Brisbane, in 1921 Elsie opened her own studio in Townsville after working for W. J. Laurie, taking over a studio in the Municipal Buildings in Flinders Street. In 1923 she opened the Elsie Lambton Studio and advertised her specialisation in "the very latest in portraiture". By 1927 she opened another studio, The Townsville City Studio, in the new City Buildings, with the photographer Jack Biehl.
Another of Edith's sisters, Nellie Doriel Lambton, who was twelve years her junior, also became a nurse. She trained at the Townsville General Hospital, successfully completing an examination there in 1918. Nellie married Townsville doctor Anton Breinl in 1919. Breinl was the first Director of the Australian Institute of Tropical Medicine, which was set up in Townsville in 1910.
Edith's brother, Alfred Harbord Lambton (1887-1979), became a Church of England priest and spent many years in parishes throughout North Queensland, including Townsville, Mackay and Sarina. He served as a Chaplain with the 11th Light Horse Regiment in the Middle East during WWI from September 1918 to September 1919. His work after the war was focused on Papua New Guinea, where he established a Mission at Sefoa, Cape Nelson, Papua. He was assisted in his missionary work by his wife Urara Mary Lambton (nee Dimmock). On one occasion, the launch they were in was wrecked in a gale and they had to swim for their lives, with the Rev. Lambton clutching their infant child while he swam.

Edith too, is a very interesting woman. She almost died in Charters Towers during an outbreak of typhoid fever there in 1903. She was nursing at the District Hospital when she fell ill. But I'll save Edith's story for my new book, which I'm hoping to release in 2018.

Australian Chaplains in WWI, an online resource available at http://ww1chaplains.gravesecrets.net/l.html

It's always seemed as if the general consensus was that the doctors set up these hospitals and then employed nurses to manage and run them. What I am finding is that many of these women, who I assumed were just managing the place for a doctor, actually OWNED the private hospital. In some instances they purchased, or even had the property built, for that purpose. 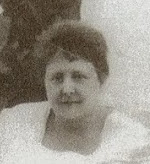 The local doctors did attend patients/perform surgeries etc. at these hospitals, but they were not running them. This is exciting stuff for an historian!

This research is part of a book I am working on that will tell the remarkable stories of North Queensland's independent/private midwives who worked tirelessly in our communities between 1890 and 1940.


Posted by Trisha Fielding at 11:29 No comments:

Anthony Ogden was variously an iron-moulder, a journalist for the Townsville Daily Bulletin and Townsville Star, a Board Member of the Townsville Harbour Board, a Mayor of Townsville, a Member of Parliament, a union organiser and advocate for industrial rights, editor of the Townsville Labor newspaper – the Clarion, a methodist lay preacher, a temperance advocate, a career politician, and many other things besides. And he is definitely an interesting figure in Townsville’s history.
Born in Yorkshire in 1866, Ogden arrived in Queensland – at Cooktown – in 1884, when he was 18 years old. He married in Townsville in 1888 and he and wife Mary-Ann had seven children together. Ogden served as Mayor of Townsville from 1924-1927.

Ogden Street, in the city, takes its name from this, at times, controversial character. In 1926 Flinders Lane was renamed Ogden Street. Alderman Ogden had long lobbied to have Flinders Lane cleared of its reported “slum-like conditions”. There were a lot of sub-standard buildings in Flinders Lane and many of these harboured illegal gambling dens and brothels, which Ogden wanted to stamp out.

Controversy seems to have followed Ogden everywhere
In 1912, when Alderman John Henry Tyack was appointed as Mayor of Townsville, Alderman Ogden vigorously opposed Tyack’s appointment as Mayor because although he was appointed by the Queensland Governor-in-Council - he wasn’t the majority choice of the Townsville Council. An election had been held but the council had failed to appoint a Mayor in the allotted timeframe, so the Governor had to act as an adjudicator to resolve indecision on the part of the Council. Tyack’s appointment caused a real storm within the council, and there was so much dissension, that at one meeting, the Town Clerk had organised for two police constables to be stationed at the entrance to the Town Hall, while two more were stationed inside the building.

“It was only by log-rolling and pulling strings that Alderman Tyack was appointed in any case. He was the nominee of a minority.”

After Ogden had stirred everyone up, one of the other aldermen asked Tyack to resign. Tyack’s response to this outburst was to promptly reply: “No hope!”.

A few years later Ogden came close to punching the Mayor – this time it was Alderman McClelland - at a council meeting in March 1916. On this occasion, before the meeting even began, Ogden was extremely worked up about an incident earlier in the day where the Mayor had apparently interfered in his business – by asking him not to take copies of the council minutes until they had been confirmed – which on this occasion they had not.  The banter went backwards and forwards for a while, until Alderman Ogden jumped up out of his chair and in a couple of strides had reached the Mayor. He went to strike the Mayor, but stopped, shaking his fist just inches from the Mayor’s face. Apparently the other aldermen shouted as one, “Stop man!” After this incident, the headline in the newspaper read: “Alderman Ogden in Les Darcy act”.

The previous month, Ogden had tried to have Dr Anton Breinl removed from his position as resident surgeon at the Townsville Hospital, on the grounds that he was an “enemy alien”. Breinl was foreign-born - Austrian - and at this time the First World War was raging in Europe. The Townsville Hospital Committee voted on the motion but it was easily defeated. Ogden then said that he would move a request be sent to the Federal Government to have Dr Breinl removed from the Australian Institute of Tropical Medicine. It’s worth mentioning here that Dr Breinl had been in Townsville since January 1910, so it must have been galling to him to have been singled out in this way because of his nationality.

In 1931 Ogden was prosecuted for defamation. This was a rare occurrence in Townsville in those days. The judge presiding over the case said there hadn’t been a defamation case in the city for 10 years. Ogden found himself in court after he declared at a council meeting that a man named Don McInnes was a “systematic law breaker”. This was in regards to not having licensed the Hollywood Miniature Golf Links that his daughters ran. To be fair to McInnes on this one, the other miniature golf links had not applied for a license either. Never one to tread lightly, Ogden also accused McInnes of having bribed police so that his illegal gambling establishment – located in the basement at the back of his tobacconist shop in Flinders Street – would not be raided. Ogden defeated the defamation suit.

There's no doubt though, that the conservative sections of society thought Ogden was truly marvellous. The combined churches of Townsville lauded his efforts in trying to stamp out gambling, and praised his moral convictions generally. Perhaps by today’s standards, Anthony Ogden might be considered to be something of a fanatic. But what's undeniable, is that he never shied away from his convictions, and he worked absolutely diligently at everything he took on.

Posted by Trisha Fielding at 09:34 No comments:

2019 marks the centenary of the outbreak of Influenza in North Queensland in 1919. It was the same illness that had been sweeping the globe ...