In February 1913, a group of Railway Estate residents met at the National Hotel to discuss the need for a new state school in the locality.
The suburb was home to many railway employees and their families, and it was a group of railwaymen, headed by Harry Griffith, George Merchant, W. Smallwood, George Moore, Chas Reeves, W. Jones, J. Hudson, A. Polkinghorne who first began to agitate for a school.

The need for a school seemed straightforward enough, considering the recent rapid growth of the suburb, but the residents had great difficulty convincing the government that there were enough potential students in the area.

At the meeting, Messrs G. Everett and P. Finn reported having canvassed the western side of the railway line and ascertained that there were about 40 school age children, and about 17 children not yet of age, while Messrs C.H. Conn and E.R. Blakeney reported that on the eastern side of the line there were 74 eligible children, with another 40 children not yet of school age.

In addition to the children in Railway Estate it was reported that approximately 90 children from Oonoonba travelled by train daily to attend Townsville schools, and it was expected that these children would attend a school at Railway Estate, if it were built. This took the estimate of the number of potential students to roughly 200.
However, it appears departmental heads thought that Railway Estate was well out of the town limits, as the Building Committee was asked, if the school were to be built, where the teachers would find accommodation? There were several boarding houses and one hotel within just a few hundred metres of the school.

Thanks to persistent appeals by the Member for Mundingburra, Mr Thomas Foley, a 1.6 hectare reserve for the school was purchased by the government for £325. After further agitation, which included a “mass demonstration” on the school reserve – where the number of potential students was ascertained by tallying up the number of currant buns handed out to children – approval was given to build the school.

It was 1916 before construction on the school began. Built on concrete blocks two metres high, with the ground underneath asphalted, the main building measured 20 metres by 6.7 metres, and was divided into three rooms, with partitions that could be set aside to make one large room.

There were also two smaller wings built at an angle, each measuring 3.6m by 9m. These wings were cleverly sited to shade sections of the verandah from the morning and afternoon sun. Mr G. Lear erected the buildings for approximately £1,800.

The school opened on 21 August 1916, under the instruction of the first Head Teacher, Mr Malcolm Fardon, with an enrolment of 240 pupils. By the end of the year, the total number of students had reached 292.

At the official opening in early August, the Committee Chairman, Mr P. Finn, reminded the assembled audience of the difficulties encountered over the past few years, in making the school a reality.

He said that when they had first gone around to find out the likely numbers of children that would attend the school, and found that there were nearly 200, some mothers had told him that “there would probably be others by the time the school was up”.

He jokingly added that he was “glad to say some of these had proved as good as their word”.

Posted by Trisha Fielding at 20:16

Redex Trials - a "Mad Dash" across the country

The big event in Australian motor sport in the 1950s was an endurance rally that tested the mettle of both cars and drivers, in a race that... 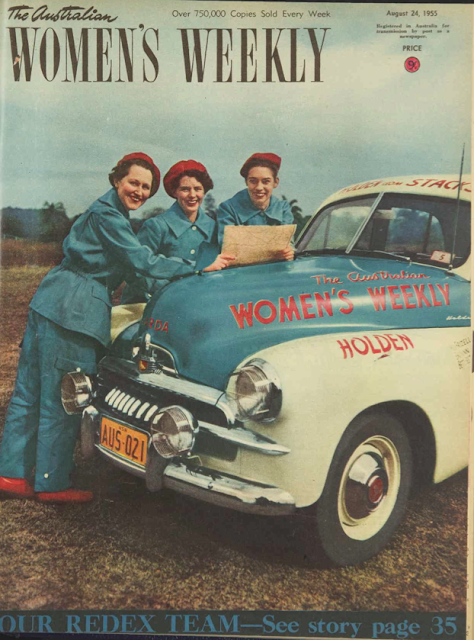