Townsville Bowls Club - a panacea for the ills of the world

Townsville's first bowling green, on The Strand, opposite the Criterion Hotel, was widely expected to be "one of the panaceas for all the worries and ills known to mankind." The Townsville Daily Bulletin made this rather ambitious statement in May 1914 when it reported on the progress of the search for a suitable location for a bowling green. Sites at The Strand, the grounds of Reception House, the Sports Reserve, Cameron Park, and West End were all considered, before a small parcel of land on The Strand was chosen.
Since there were already 70 people interested in becoming members of the Townsville Bowling Club - if a green could indeed be built - the Townsville Daily Bulletin predicted:

... it is now practically certain that before long Townsville will possess its bowling green, which the local citizens, both old and young, will soon learn to appreciate as the source of many hours' keen enjoyment, and as one of the panaceas for all the worries and ills known to mankind.

The Townsville Council soon resolved to grant the Club a 15-year lease for a parcel of land on what was known as the Strand Park Reserve for the purposes of laying down a bowling green. There were a few conditions on the lease, one being that the Council could take the land back (after the expiration of the term of the lease) if it felt that the land was required for other purposes. Plans and specifications for the green itself and all buildings proposed for the site had to first be approved by Council. There was also a requirement for the club to allow "ratepayers and the public to have the option at all times of viewing from the banks all games played upon the green."
The official opening of the bowling green took place in July 1915, though the green had reportedly been in use for some weeks before the official opening. The green itself had cost £579 14s 2p, and the building and fittings £106 9s. The Townsville Daily Bulletin reported on the opening:

The green looked very attractive on the occasion, and the fence had been decked with flags, whilst over the pavilion floated the Australian flag and the club colors. The ceremony was timed for 2.30 and shortly after that hour, a large number of members and guests were present, the latter including a number of ladies, who were received by Mrs W. Hunt, the wife of the President of the Club.

At its official opening, the Club boasted 10 life members, 10 country members, and 144 ordinary members. All members were men. Membership was not open to women, though the Bulletin reporter suspected that the women who attended the official opening might have liked to become members, noting: "Interest was taken in the games, and several feminine voices were heard regretting that ladies were not eligible for membership to the Club." The Club did eventually allow the "ladies" to get involved, and not just in preparing the afternoon tea!
In 1991 - in a move that was probably as controversial as allowing ladies to become members - the Club converted the green to synthetic turf. Membership numbers reportedly dropped significantly after this. 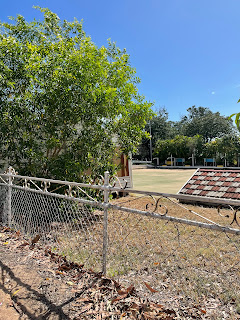 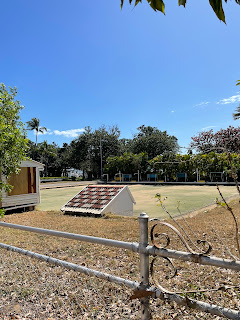 Former Townsville Bowls Club, August 2021. Photos: Trisha Fielding.
Long outlasting its initial 15-year lease, the Townsville Bowling Club (the name was later shortened to Townsville Bowls Club) ran for 100 years. It closed its doors at the end of 2015. The site is now a pretty sad reminder of the glory days of the Club, though the vintage gates are still rather fabulous. Pictured below, they survived the onslaught of Cyclone Althea in December 1971 and are still standing proud today.

Posted by Trisha Fielding at 17:22